LYMA speaks to Rose Ferguson and Eve Kalinik, the nutritionists behind The Wellness Breakdown.

“Rose definitely got the better end of the deal,” laughs Eve Kalinik of her podcast co-host and fellow nutritionist Rose Ferguson. Each week the two health foodies challenge each other to try out a wellness ‘trend’ (some more faddy than others) with a view to seeing which are worth pursuing and which are, frankly, a waste of time and money. ”I was given the challenge of giving up caffeine in the last episode - and I failed on day one because of the headaches. I thought ‘Oh my God, I'm having some sort of seizure here!”

The two friends may make light, but actually they take the subject seriously. Qualified, practising nutritionists for over a decade now, they have seen massive changes in the way we all relate to wellness.

“There's so much information available now,” explains Rose. “But hand in hand with that is a whole world of misinformation. Both Eve and I come from the school of 'it's not rocket science to take care of yourself', but even we find it hard to cut through the noise.”

The two met at the College of Naturopathic Medicine, when both were in flight from the fashion world. Eve was losing her mind with stress as a fashion PR, meanwhile Rose was juggling working as a model and the birth of her third child. She realised the two lifestyles were not conducive. Married to the Britpop artist Jake Chapman and a celebrated alumni of the Kate Moss school of 90s fashion, Rose still dabbles in the industry, but her nutrition practise is now her main focus. 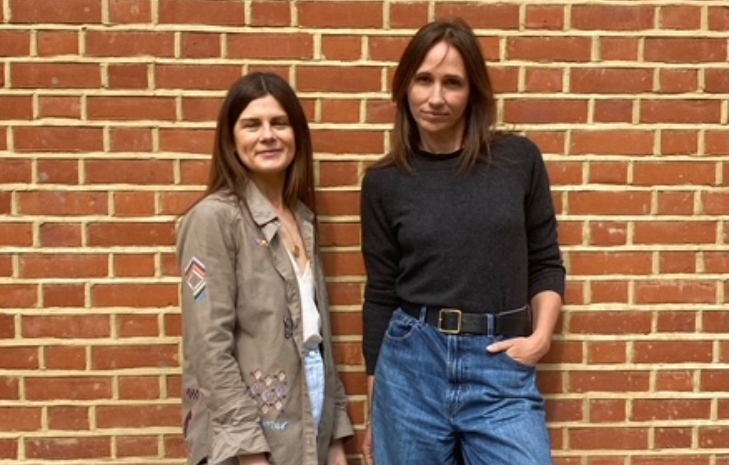 The birth of The Wellness Breakdown

As you would be hard pressed to get an appointment with either Eve or Rose - they say that, post-Covid, interest has sky-rocketed - both saw a role for advice that was more freely accessible. Particularly as they were constantly being tackled by mates in the pub about what works and what doesn’t. Thus their podcast, The Wellness Breakdown, was born.

This is why Eve was having to try and survive without a coffee in the morning: so that others don't have to, unless it works. “Obviously the headaches were because I didn't wean myself off caffeine slowly, I just went completely cold turkey,” explains Eve. “But now I have actually weaned myself off it, I haven’t gone back – it’s been game changing for my levels of anxiety. I realised how much adrenaline I was running on without knowing it. I don't have that jittery fizzy energy that you get from coffee anymore.”

It’s not just Eve who has to liberate herself from our modern opiates, however. “For me the hardest one was my phone,” says Rose. “Cutting down on digital, not looking at screens at night. Like lots of people, I had got myself into a place where it lulls you off to sleep. It was a really hard habit to break. But now I do it much less, and that's liberating.”

The Wellness Breakdown take on LYMA

For season two, which launches this week, the pair tried juice fasting, getting in 10,000 steps, CBD, microneedling, cutting out sugar and meditation. They also road-tested supplements. Both are firm believers that you can get most of what you need from a balanced diet, so it was with some cynicism that they agreed to trial the LYMA Supplement. But they liked the idea of it, as both nutritionists are a fan of efficacious, proven products (they use the term ‘medical wellness’.) “The idea all the ingredients have been patented was instantly appealing,” says Rose. “Patents can be properly peer reviewed. For me, that's what's really innovative about LYMA: the studies and the research to back up the supplement.”


”What I like is that Lucy [Goff, LYMA Founder], is emphatic that her Supplement works on top of a balanced diet,” agrees Eve. “She says she’s not here to replace your diet - and she's also very transparent about the cost as well, which is really refreshing. The reason why LYMA costs so much is because they spent money on the patents.” To find out how they got on, you’ll have to tune in to the episode on May 17th.

The Ballad of Eve and Rose

For Rose, trying to live a healthy life was a consideration from an early age. “My Mum was a naturopath, with a big belief that you could heal yourself with how you lived,” says Rose. “That’s what I grew up with. She always used to say ‘We're not going to get sick’. She's completely batshit crazy, my mum, but quite amazing.” Nutrition, in the end, was a more tangible path for Rose than her mother’s naturopathic medicine. “More science. And then of course it went into ‘balancing the books’ - going out on the razzle and eating well seemed to be quite a good pay off.”

Rose’s wild 90s days are well documented, and she is amazed now at how much the modelling industry has changed. “Oh my god, watching the nutrition, food and education that the girls get given now, there is no comparison. It was so insane when I look back on those days, but at the time it seemed completely normal. You always got champagne before any show, it didn't matter what time of day that show was. So it could be 10:00 o'clock in the morning, you're getting ready at 8, and they have champagne. There was just no awareness.”

Not, adds Rose, that it ever felt controlling or abusive. “I think people love to frame it as “ohh, poor models!”. It didn't feel like that to me. I had a really nice time in the fashion industry. I made all my best friends. But now I go and talk to models and it's really interesting [that they have] that education and how it's changed.” It’s a long way from the moment Kate Moss announced “Nothing tastes as good as skinny feels.” Rose stifles a smile when I reference this. “Hmmm... I don’t think that’s great for food relationships.”

Eve also has a childhood steeped in health practices. “I grew up with a Polish mother who grew up in a farm, and my dad's Polish, so we always had things fermenting in airing cupboards. Both my parents are now in their 70s and - touch wood - really well.” Perhaps unsurprisingly for the child of fermentation fans, gut health is now Eve’s USP. "I didn't find gut health. Gut health found me.”

How to live a healthy lifestyle

A healthy lifestyle is what we are all aiming for, but in the last few years the conversation in wellness has really opened up into a discussion about longevity. What is their stance on whether you can eat and supplement yourself to a longer life?

“I’m not sure about this obsession for a longer life,” says Rose. “I want to be well for longer. If I drop dead at 76 and wasn't ill, I think I'd be happy. But if I stayed alive to 96 and was unwell for 20 years - I don't really want that. Can you hack your body to live longer, or live healthy for longer? That's what I'm interested in. The way it stands at the moment, you're going to be ill for longer because people start taking medication in their 40s. It's terrifying. But if you take care of yourself, make good choices 80% of the time, then I definitely think you will be better off for longer, even if your genetics are predisposed to chronic illness or an autoimmune condition.”

Does Eve think you can hack your body and nervous system for a longer life? She thinks so, and she thinks there’s one thing that gets you there: “meditation. People focus too much on diet and nutrition when, actually, they could acknowledge more of the mindful practices that have so much research and science behind them. Having said that, a diet full of whole foods and minimal processed food will go a long way.”

For Rose, everything is good in moderation: “managing a condition is easier if you’re looking after yourself, but the idea of having a drink and going dancing is a good choice too every now and then.” The dopamine from a bit of fun, she says, is just as vital as the nutrients from a very wholesome plate of food. “I don't think it’s a good choice to be rigid around food, and afraid of having a bit of fun. Food is not just about fuel. There’s so much else to it. You don't want to end up reaping all the really healthy stuff, but being miserable at home on your own.”