Whether it's calcium intake or phytoestrogens, here's the menopause diet to follow.

You may find you lay down more fat as you enter this stage of your life. This is because your body’s fat cells start to produce more oestrogen to compensate for the falling levels produced by your ovaries, and this can sometimes accumulate around your middle and prove hard to shift. This is happening as a result of inflammaging and sticking steadfastly to an anti-inflammatory diet for menopause can rebalance hormones and effectively tackle the problem.

“Even if you are the same weight as you were when you were 25, your fat distribution changes at the menopause,” said Jennifer Low, a registered dietitian at JL Nutrition Clinic. “To a certain extent I think women should embrace this and not feel guilty about it and try to accept their body shape has changed.”

That being said, “it’s important to stay a healthy weight and eat the right nutrients to help balance your hormones and protect against long term conditions you are more at risk from developing post-menopause.” The risk of heart disease and osteoporosis increases at that point, and it's worth noting that excessive menopause weight gain increases the risk of developing type 2 diabetes and non-alcoholic fatty liver disease (NAFLD), wherein fat builds up in the liver. 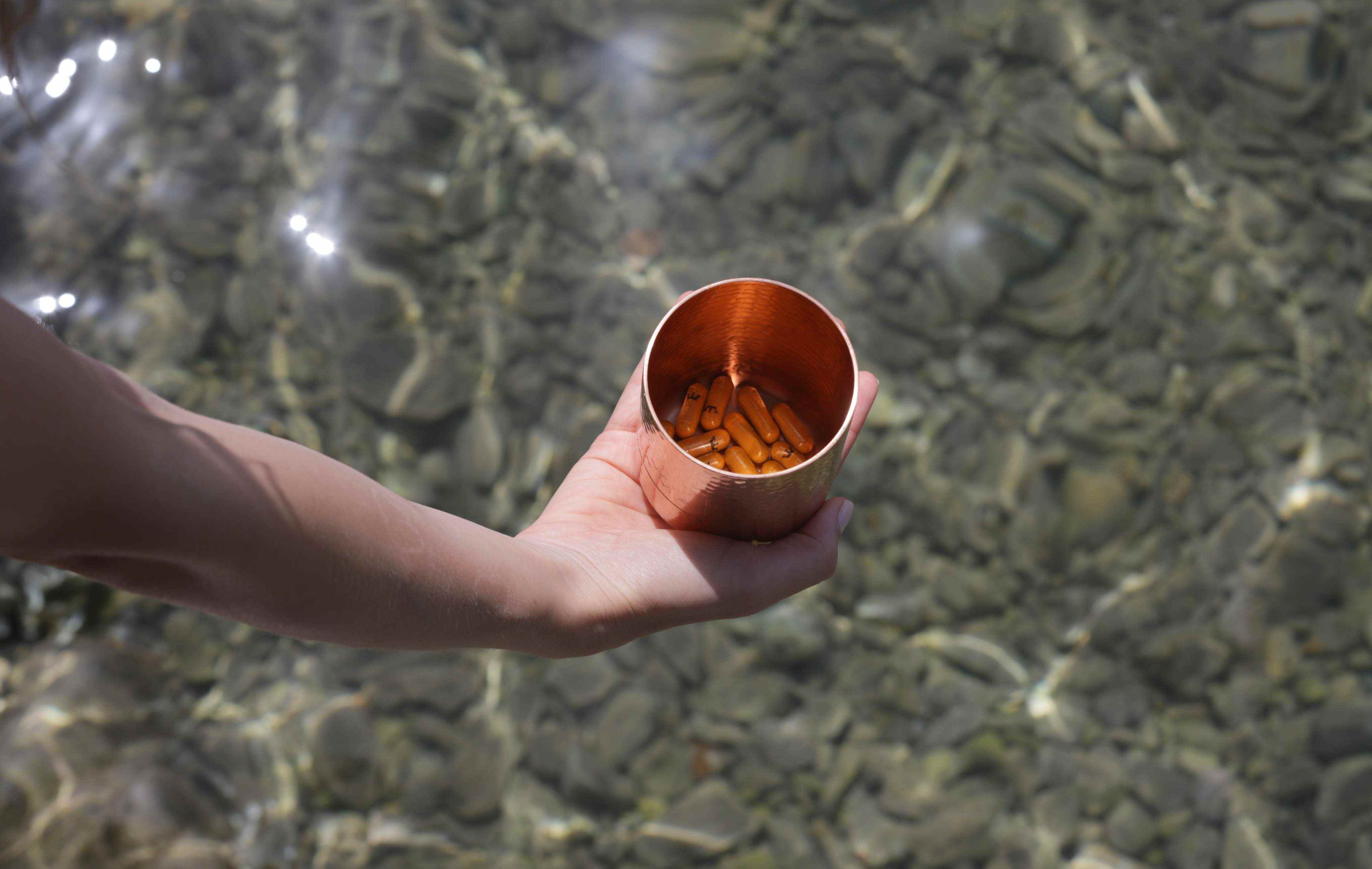 Diet to balance your hormones and limit inflammation

Foods such as soya, linseeds, tofu, miso, edamame beans, pumpkin seeds, dried apricots and dates are rich sources of plant chemicals called phytoestrogens. These are similar to oestrogen produced in humans and can have a weak oestrogenic effect on the body, helping to plug a menopausal shortfall.

The British Dietetic Association says there’s evidence eating several portions of these foods a day may ease hot flush symptoms, although this strategy doesn’t work in all women and can take 2 to 3 months to have an effect. A review of 15 randomised controlled trials published in the journal Climacteric in 2015 found that eating phytoestrogen-rich foods did reduce the frequency of hot flushes, however, and what hot flushes they did experience were tolerated with no side effects.

“I suggest women try foods such as linseed bread, soya milk and yoghurts fortified with calcium and edamame beans which they can incorporate into two or three meals a day,” said Low. “If you’re suffering from hot flushes, you might also want to cut down on hot drinks and spicy food as anecdotally they can make hot flushes worse too.”

What is the best anti-inflammatory diet? Mediterraneans know

Oestrogen protects the heart and circulatory system, and when levels drop so does your protection. The British Dietetic Association (BDA) recommends following a heart-healthy diet, similar to the Mediterranean Diet, to lower your blood pressure and cholesterol. “The Mediterranean Diet with lots of wholegrains, fruit and vegetables, nuts, seeds, legumes and oily fish, some lean meat and unsaturated fats, is proven to be protective against heart disease,” said Low. “It’s also fibre-rich, so it helps you stay fuller for longer, which makes it less likely you will snack and be susceptible to menopause weight gain.”

The general recommendation is that we eat 30g of fibre a day, but surveys have shown we’re usually only eating 18g on average. An important study commissioned by the World Health Organisation, using data from 250 trials conducted over 40 years, concluded there was a 15 to 30 per cent decrease in cardiovascular deaths in people who ate the highest amount of fibre compared to those who eat the least. The review also found that eating fibre-rich foods reduced incidence of coronary heart disease, stroke, type 2 diabetes, and colorectal cancer by between 16 to 24 per cent. “There are oestrogen hormone receptors in the gut,” added Low. “Constipation and bloating are common problems during menopause as oestrogen levels drop and fibre helps reduce these issues. Try adding more nuts, seeds, beans and lentils to your meals.”

Best practice involves basing meals on fish, nuts, beans, or pulses at least once or twice each week and eating at least four to five portions of unsalted nuts, seeds, and legumes such as beans and lentils per week, plus cutting back on salt (to cut the risk of high blood pressure). “Aim for at least two portions of fish per week, one of which should be oily; salmon, fresh tuna, mackerel, trout and herrings are rich in omega 3 fats,” explained Low. “Oily fish includes canned sardines, mackerel, salmon, trout, and herrings.” A study by Leeds University found intake of some foods may even influence the age perimenopause/menopause starts. A high intake of oily fish and fresh legumes was associated with a delayed onset of menopause, while a high intake of refined pasta and rice could be connected to an earlier menopause. The standard advice of eating a minimum of 5 a day fruit and vegetables still applies too. Fruit and vegetables provide vitamins, minerals, fibre, and other plant nutrients such as antioxidants that are cardio protective. Aim to eat a range of different coloured fruits and vegetables whether they be fresh, frozen, canned, dried or juiced. The BDA also suggests switching from saturated fats to unsaturated fats, grilling rather than frying, changing to lower fat dairy, and reducing the intake of sugar and refined foods such as soft drinks, sweets, cakes, and biscuits.

Prof. Paul Clayton, pharmacologist and chief science officer with LYMA Supplement, added the Mediterranean diet is also anti-inflammatory. “This is a good idea as we know that chronic inflammation is one of the key drivers of long-term health problems,’ says Paul. “If you remove this inflammation in your diet, you are reducing your risk of major diseases and slowing down many core elements of biological ageing.”

Why you should protect your bones with calcium-rich foods

You start to lose bone strength from your mid-thirties onwards, but this accelerates after the menopause when bone-building oestrogen hormone levels start to decline. One in three women over 50 will experience an osteoporotic fracture in their lifetime. It’s really important you eat a healthy and balanced anti-inflammatory diet in peri and post menopause and take special care to get enough calcium and vitamin D.

Calcium is found in dairy products such as milk and cheese, but also green leafy vegetables, almonds, sesame seeds, sardines, dried fruit, and fortified foods such as breakfast cereal, or oat and soya milks. Women and men need 700mg of calcium a day to maintain health (but check with your doctor if you are taking medication for osteoporosis as you may need more.) Check the University of Edinburgh’s list of calcium content in foods here. Aim for 2/3 portions a day: 200ml of semi skimmed milk, a matchbox size slice of cheese and a small yogurt.

Vitamin D is needed to regulate levels of calcium and phosphate vital for bone health and is found in oily fish, fortified foods such as spreads and red meat, liver, egg yolks and liver. But it’s hard to get enough vitamin D from the diet alone, and in the dark UK winter the body doesn’t get enough sunlight exposure to make it. For this reason, the Department of Health recommends people may want to take a 10mcg daily supplement.

Everything you need to know about the menopause

Bioidentical, body identical or artificial - what type of HRT do you need?

The psychological fallout of the menopause, and how to treat it