What’s the Difference Between LED and Laser Light Therapy Treatment?

Light therapy is an excellent way to treat all manner of skin conditions whether they be lines and wrinkles, pigmentation, sun damage, rosacea, acne breakouts, residual scarring, or the unwelcome sag. Light as an energy source has the capacity to travel into our skin cells to energise them, transform them or all-out obliterate them.

Can LED or Laser Light Go Into Skin?

Anyone vaguely paying attention in their physics lessons might recall those prism experiments with light refraction. No? Okay, here goes. When light hits a surface that it can’t travel through, it bounces off in a different direction and disperses. And that’s LED light – a beautiful, scattered light that glows on skin’s surface. That glow shows LED is able to treat the epidermis but 95% of LED light bounces off the skin’s surface and only a measly 5% is able to make it through that top layer of skin. Laser light however, suffers no such travel restrictions or bounce back because it’s a straight-line, coherent light source that travels in a far more linear wavelength. Hark back to those slightly questionable laser pen toys we had as kids that would shine onto adjacent buildings, even passing through the palm of your hand or the neighbours’ curtains. 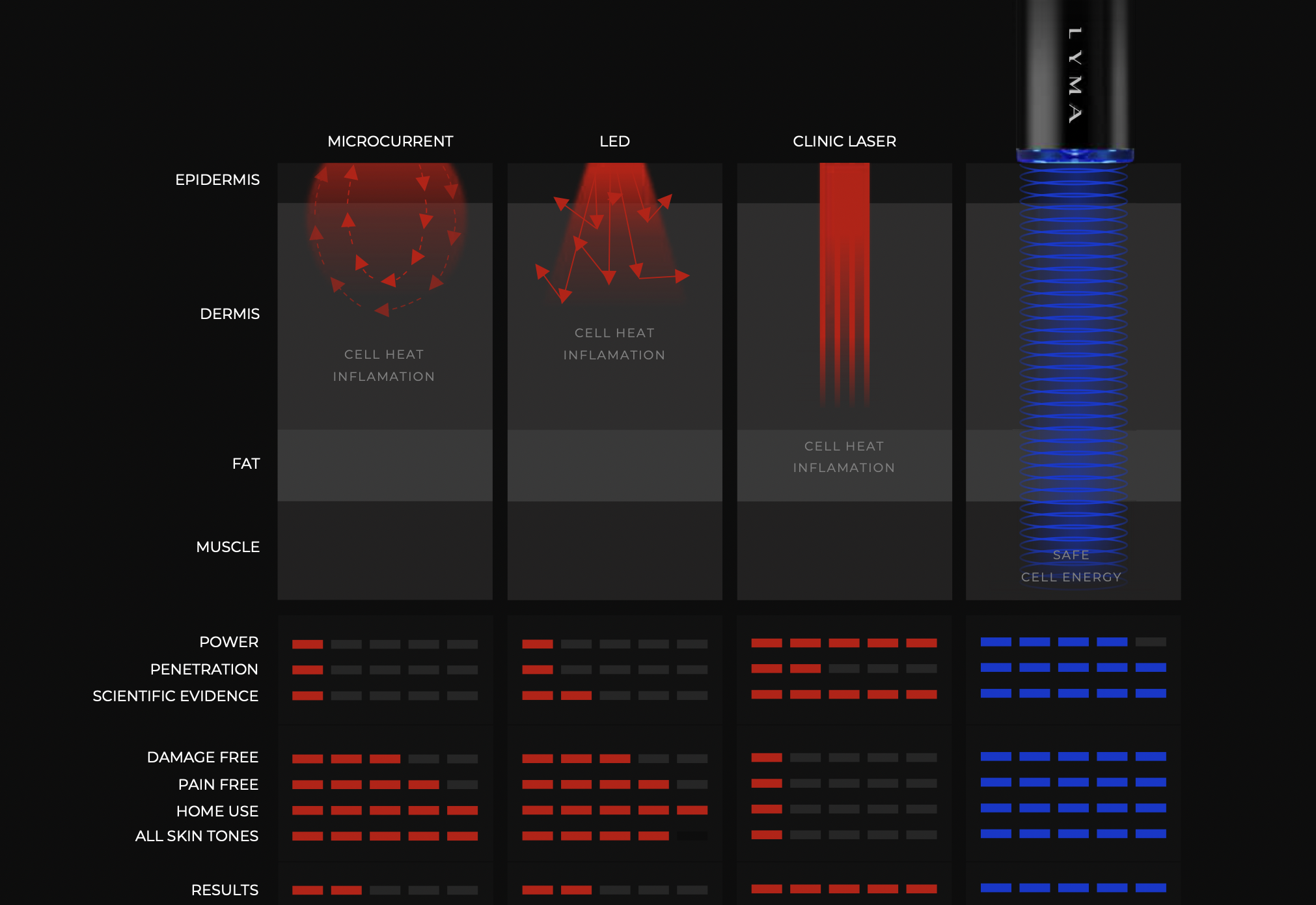 Lasers: The Hot and the Heavy

The biggest names in clinical lasers dominating the dermatologist’ offices right now are the Er:YAG, Nd:YAG and Fraxel. These powerhouses all fall under the category of hot lasers due to their intense thermal output and the associated damage they cause. Generally viewed as a necessary evil to achieve the vibrant skin you truly want, some are ablative, meaning they remove the entire top layer of skin, others are non-ablative and cause controlled, purposeful thermal damage to skin to trigger a collagen-stimulating healing response. Whatever their hit rate, these lasers force the skin into panic-making new skin cells, alerting more collagen to come flooding to the rescue which presents in softer, smoother, clearer skin. Even for the most educated of beauty aficionados, that’s a lot to comprehend. Which is why we’ve compiled a comprehensive guide to everything you could ever want to know about them here.

Can You Get Cold Lasers?

Previously, cold lasers existed but only at far lower power outputs because after all, asking for all the power but none of the pain seems a little cheaty. However, technology always shifts the bounds of possibility and now The LYMA Laser is the first ever skincare device to deliver 500mW of interrupted laser beam light (matching what the in-clinic lasers blast out), whilst remaining completely cold to the touch.

But without the thermal damage triggering the collagen response, how does a cold laser work? The LYMA Laser isn’t your classic beauty laser, it’s the same laser you find in car factories for cutting steel parts and it’s robust enough to last a decade. All that concentrated energy would indeed be hot if it weren’t diffused 25,000 times by two internal lenses and therein lies the world-first breakthrough engineering. This construct allows near infra-red laser light to penetrate deeply into the regenerative base layers of the skin minus any heat or damage to the skin. Technically named Photobiomodulation, The LYMA Laser beam switches off the negative skin cells that produce nitric oxide, thus starving skin of oxygen and associated with degeneration and instead, allows them to counteract and create oxygen again. This biological process also fades out sun-induced pigmentation and reduces rosacea inflammation. We're talking light technology that’s moved light years away from LED.

So Why All the LED Skin Device Hype?

LEDs are big in beauty right now because they’re beneficial to skin health and its outward appearance. There’s certainly scientific evidence to suggest that blue LED light eliminates the surface bacteria that blocks pores and exacerbates acne and that can be game-changing for acne sufferers. Red LED light has been shown to re-oxygenate mitochondria on the skin's surface for added luminosity and there's heavy inference that this also increases collagen production but the medical research on that is scant, so more is needed. All these attributes are worthwhile in their own right but they’re all occurring at a superficial surface level. There are plenty of at-home options for LED devices for skin; those Iron Man-alike masks, sunbed style shields, lamps to sit under like a newly hatched chick and nifty handheld wands – take your pick. LED light devices for skin are cheap to produce and though blue LED light is dazzling to the eye, they’re not dangerous simply because they’re not that powerful.

Why Does the LYMA Laser Contain LEDs Then?

In The LYMA Laser, the blue or red LED lights (depending on where you are in the world) that surround the Laser are just there as status lights to show the device is powered on. There will be secondary benefits to those LED lights, be they acne-fighting (blue) or glow-inducing (red) but that’s not where the technology lies. The tiny red precision dot in the centre is the near infra-red laser beam capable of making significant change, only it doesn’t show up when you shine it on the skin because it’s traveling straight through it.

LED and laser light are not interchangeable and really, there are just three options. Option one, stick to the soft approach with LED light therapy and the skin perks are subtle and fleeting. Option two, go for a traditional in-clinic ‘hot laser’ and the gain might be worth all that pain. Or option three, invest in The LYMA Laser, a smart-tech cold skin laser that alters the genetic behaviour of cells to improve long-term skin health and appearance without causing it any harm.

Ok, that’s an easy choice and also why The LYMA Laser is the next frontier of good skin for all.

A skin condition that occurs when hair follicles become plugged with oil and dead skin cells.

A light-emitting diode (LED) is a semiconductor light source that emits light when current flows through it. Used in low power skin devices.

When cells in the epidermis become damaged or unhealthy and discoloured through over production of melanin.